Local MP Sheryll Murray met with members of the Cornwall Air Ambulance this week in Westminster to discuss their activities, and to thank them for the amazing job they do serving members of her constituency. 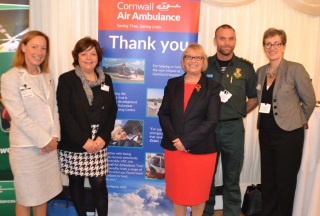 As the local MP for South East Cornwall, one of the many areas the Air Ambulance serves, Sheryll Murray speaks with great gratitude when she says “I am very honoured to have had the opportunity to thank the Cornwall Air Ambulance Trust for the tremendous work they do to ensure they tend to the extremely ill or injured people in my constituency. The secluded beaches and the uneven countryside makes Cornwall a particularly challenging area for a helicopter, therefore I am very grateful for the Air Ambulance crew for making sure the urgent medical care required by the patients is with them as quickly as possible”.

In April 1987, the air ambulance was introduced as a fundamental part of the ambulance service in Cornwall. The service is financed by donations. The Air Ambulance is a much appreciated in Cornwall, and the locals are particularly proud of it. It was the first one of its kind in the United Kingdom. The effective model established in Cornwall has been copied all across the country, and now there are currently around 30 air ambulance helicopters, the majority of which are all funded by public contributions. Although Cornwall presents unique challenges such as isolated island communities and out-of-the-way beaches, the quick, well equipped helicopter can be on the scene of an incident in an average time of 12 minutes, and can reach the Isle of Scilly in around 28 minutes. The patients can be treated on scene, or can be flown to the hospital that is best suited to their needs. The helicopter flies to around 700 rescue operations a year remaining the busiest single helicopter air ambulance in South West England.

A new development of a Volunteer and fundraising centre is now underway due to a very generous grant and the facility is due to open in Spring 2016.