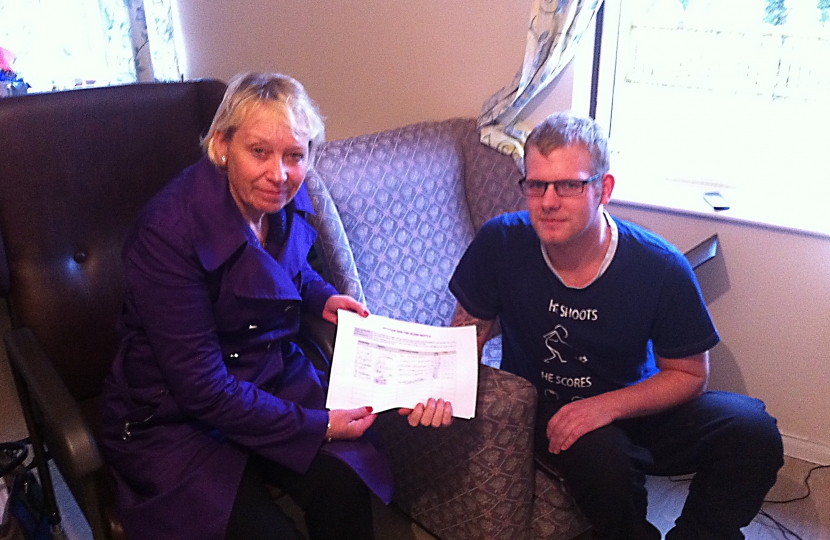 On Friday 11th February 2011 Sheryll Murray, local MP for South East Cornwall, met with Jack Nutting at his home in Liskeard to hear his story and to find out how she could help.

Last September Jack Nutting, who was born in Cornwall, was hit by a bottle by someone he did not know at a bar in London as he tried to calm down and separate two girls which where fighting.  This was a moment that changed his life forever.  Before this Jack was planning to study medicine at St George’s University but the attack has meant that he had to have part of his frontal lobe removed which left him with severe movement difficulties down his left hand side and memory problems.  Whilst the alleged attacker has been caught Jack is determined that this weapon should be taken away and that bottles should not be served in pubs and clubs in town centres after 9pm at night.

Speaking after meeting Jack, Sheryll said, “Firstly I would like to pay tribute to Jack’s bravery in bringing this campaign to the public eye whilst suffering the effects of this very serious attack.  As Jack’s Member of Parliament I am determined to ensure that this case is highlighted at the highest level of Government.  I am making representations to the Minister and assisting and have agreed to ensure that his petition is presented to Parliament.  People wishing to assist his campaign can sign the petition at my office in Windsor Place in Liskeard.”

Pictured: Sheryll Murray MP meets Jack Nutting at his home in Liskeard to hear about his campagn.