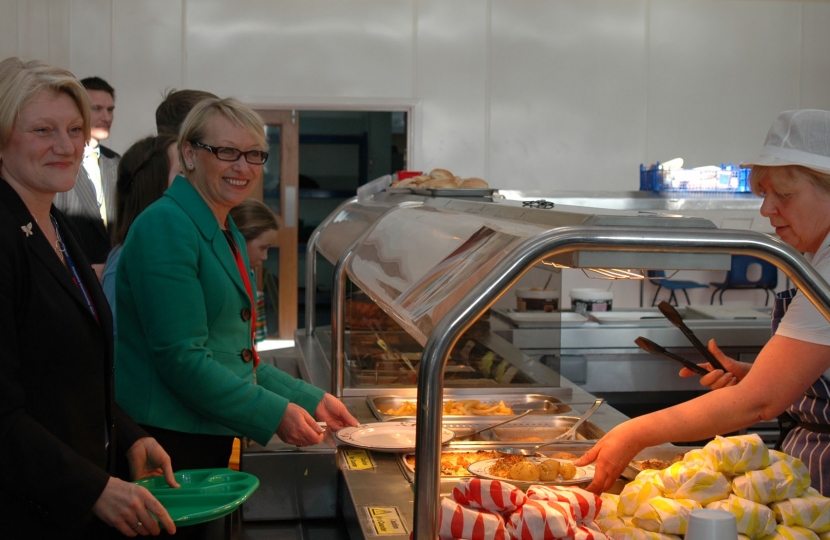 On Friday 3rd February Sheryll Murray MP visited Torpoint Community School to see recent developments at the school since it became a Co-operative trust. Having attended the school herself and then being an active parent whilst her children where pupils, Sheryll could see the many ways in which the school has changed.

After a meeting with Headteacher Andrea Hazeldine and staff, Sheryll went on a tour of the school which started with lunch, Sheryll joined some pupils, staff and the head, where they discussed the importance of school dinners and also the importance of pupils signing up to Free School Meals to gain access to further funding for the school.

After her visit Sheryll said, “This visit was particularly interesting for me as I was both a past pupil and Governor of the School. After receiving a briefing from Headteacher, Mrs Andrea Hazeldene, and Mr Ian Smart, the School Business Manager, I joined some pupils for lunch. I was really impressed by the superb lunch that was prepared and served by school cook Mrs Tina Crago. It was made even more enjoyable as Tina and I had both been pupils at the school and were indeed in the same year.”

You can find out more about school lunches here:
http://www.direct.gov.uk/en/Parents/Schoolslearninganddevelopment/SchoolLife/DG_4016089