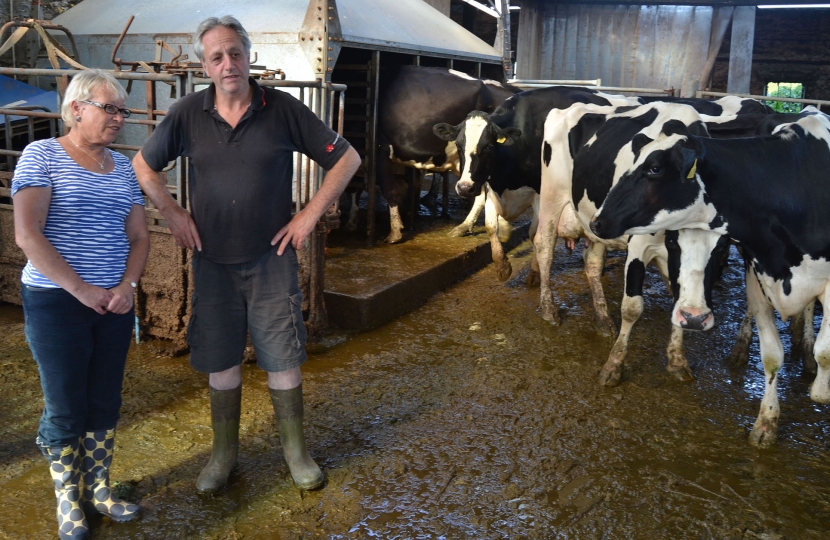 Local MP Sheryll Murray has been very concerned about the most recent crises to hit the Dairy Industry in South East Cornwall and welcomed the enquiry by the EFRA select Committee of which Sheryll is a member.

Local Dairy farmers make an important contribution to South East Cornwall and so many have invested heavily in expanding their businesses. Trewithen Dairy is an example of a business which processes milk which is sourced from many surrounding farms.  They, the Cornish Cheese Company who produce Cornish Blue and Cornish Gouda are just some examples of the fantastic dairy related businesses within the constituency which have invested recently in growing their businesses. The EFRA Select Committee visited Cornish Cheese Company last year to hear for themselves how the business has expanded.

In a statement Sheryll said, “Frequent, sharp and unpredictable fluctuations in milk price are driving dairy farmers out of business every week.  The volatility of worldwide and domestic milk markets is making financial planning and investment impossible for small-scale producers unable to hedge against changes beyond their control. The vast majority of dairy farmers fall outside the protection offered by the Groceries Code Adjudicator (GCA). She can only investigate complaints involving direct suppliers to the big 10 supermarkets and retailers, and as most milk production is small-scale, that excludes most dairy farmers.

“The EFRA Committee thought that was wrong when the GCA was set up in 2013, and events since then justify our view that her remit should be extended to include small-scale suppliers, whether or not they have a direct relationship with the ultimate seller of their produce.

“Farmers have faced deep and rapid drops in milk price in the past six months, arising from a drop in worldwide demand, a Russian trade ban, and international oversupply following high milk prices in 2013.  Protests have resulted at some processing plants, and farmers have been leaving the industry, bringing the total number of UK dairy farmers below 10,000 for the first time.

“This can’t go on and I hope the Secretary of State will recognise the problem and extend the remit of the of the Grocery Code Adjudicator.”

Photo – Sheryll visits one of the diary farms in her constituency last year.