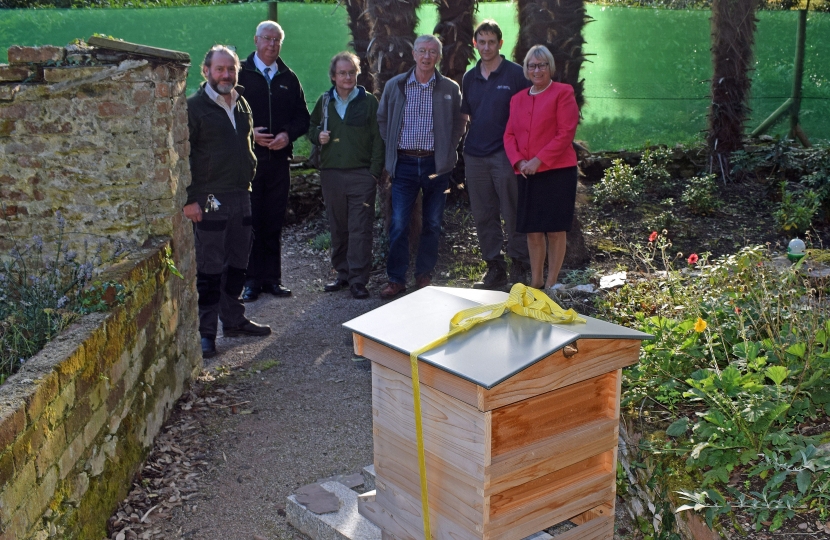 Local MP Sheryll Murray was pleased to visit the B4 project which focuses on the Cornish Black Bee at Mount Edgcumbe House on Friday.

Sheryll was pleased to be given an update on the B4 project which she first visited in 2013 at its base near Gunnislake.  Sheryll in particular was given new important information on the threats to the hives and on the importance of being able to store bee sperm.

B4 runs England’s first Black Bee Reserve on the Rame Peninsula.  It says that the B4 project aims to explore the “genetic signatures” of locally adapted forms of black bee in Cornwall and across the UK.  These will be linked to observable colony traits important to beekeepers (hardiness, longevity, activity in cold weather, defensive behaviour).  This possibility to archive diversity through long-term storage of frozen bee sperm will also be investigated.  These approaches will allow scientifically informed conservation and management of the UK’s native honey bees.

Following her visit Sheryll said, “I would like to thank the B4 group for their update and it was fantastic to meet the bees themselves in their natural habitat at Mount Edgcumbe Park in the walled beds area.  It is also good to see these historic beds being used to grow bee friendly plants.

“I am now contacting my colleague Huw Merriman MP who Chairs the All-Party Parliamentary Group for Bees which exists to inform parliamentarians about bees, other pollinators and beekeeping and to campaign and raise awareness of impacted issues.  I am keen for the B4 group to meet with this Parliamentary Group to be able to brief politicians from across the political divide on their project.”