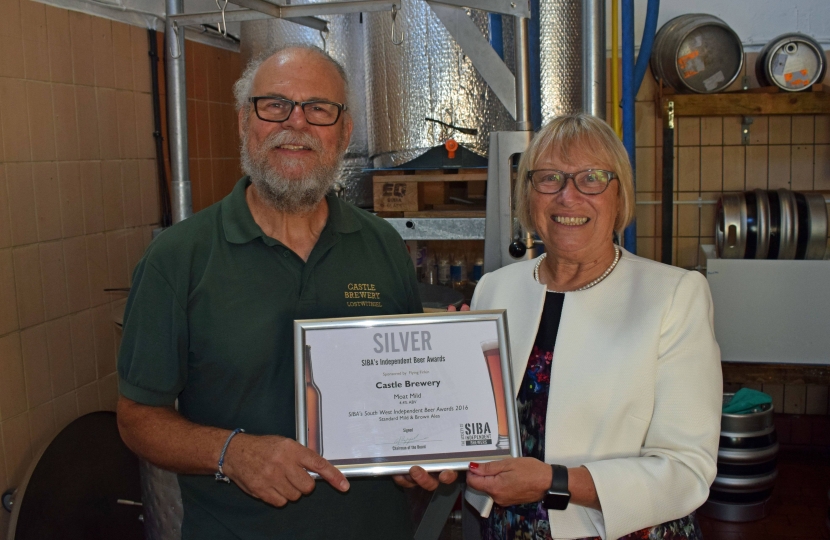 Local MP Sheryll Murray, who was awarded the title of Parliamentary Beer Champion by the All Party Parliamentary Group for Beer earlier this year, was pleased to congratulate Theo Corfield of Castle Brewery on his Society of Independent Brewers (SIBA) Silver Award for their Moat Mild.

Castle Brewery is a small batch brewery based in Lostwithiel which brews traditional ales.  The microbrewery has been running for ten years and has been run by Theo who turned his hobby into his job after leaving local government.  The brewery does use up to date equipment to get consistency of taste.   Theo won the Society of Independent Brewers (SIBA) Silver Award for his 4.4% Moat Ale which is described as a ‘Traditional ale with a sweet chocolate flavour’.

Sheryll was awarded the prestigious Parliamentary Beer Champion tankard from the Cross Party brewing industry group.  It was not for drinking lots of beer.  It was for all the work Sheryll did in the past on legislation as it went through Parliament and in promoting the industry.  Both Fuller’s who own Cornish Orchards from near Duloe and her constituent James Staughton who is the Managing Director of St Austell Brewery were at the event in London.

Following her visit Sheryll said, “I am delighted to have learned about the progress of Castle Brewery and would like to thank Theo for showing me what he does in Lostwithiel.  At the last 2016 South West Region Beer Competition in Newton Abbot, the Castle Brewery traditional Mild Ale took a Silver medal in the cask category. I would recommend that you look out for Theo who sells his beers at various local produce markets or you will find his beers on sale at various outlets like the Duchy Nursery or Purely Cornish in East Looe.  Castle Brewery is one of three Micro Breweries in South East Cornwall.  I am always keen to promote excellent local produce like this from South East Cornwall.”