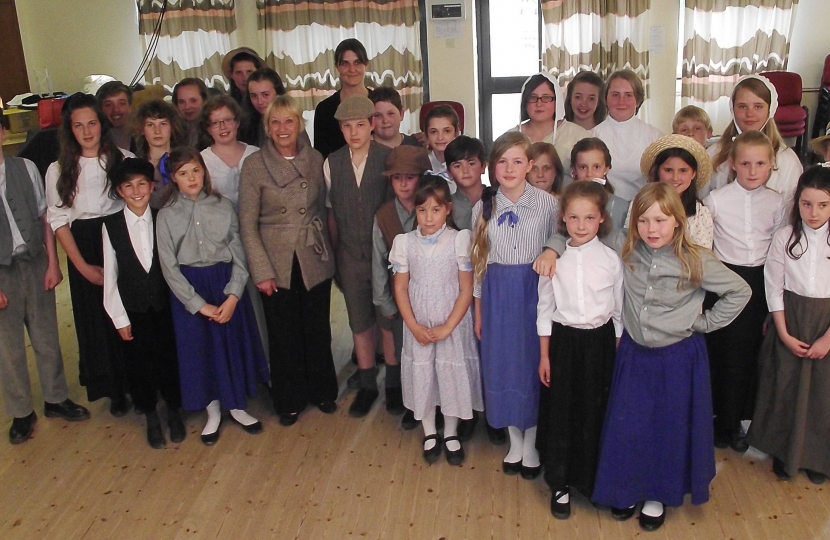 On Saturday local MP Sheryll Murray went to see a production about Bodmin Moor on the Moor itself. The Arts Council-funded community play Cornish Phoenix charts the lives of a group of families who live on the moor over four generations over a hundred years, through wars, economic turmoil and the relationships between the families involved.

The Sterts theatre is based in Upton Cross just north of Liskeard and around 15,000 people watched shows there last year. It has a seating capacity of 400 and has facilities including a restaurant, beer tent, hot food and snacks.

Following her visit Sheryll said, “What a fantastic and very professional performance certainly rivalling for enjoyment anything in the West End. The cast worked incredibly hard and even the smallest child kept in character throughout. The storyline was interesting, not just because it was locally based, but because it was incredibly well written. I would like to congratulate all those who have been involved in the production many of whom are making their first venture onto the stage.

“I would encourage everyone to go and see at least one performance at Sterts this year and see for yourself what a great night out it is.”

Cornish Pheonix plays on dates in August. Many other shows are also on during the season and details are available through the website http://www.sterts.co.uk/

Pictured: Sheryll meeting with younger members of the cast before the performance.