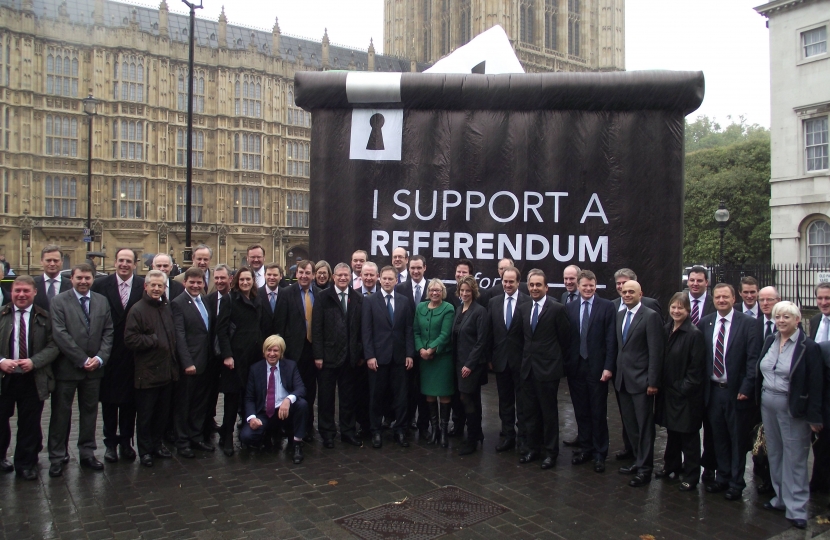 Sheryll Murray MP was pleased to Conservative Party Chairman Grant Shapps and many other MPs to support a referendum over the country’s membership of the European Union and has called on other local politicians to back the Bill.

The Conservative MPs came together just before the Bill was debated on Friday in the House of Commons.  Sheryll explained the current passage of the Bill as, “The first debate on the EU Referendum Bill Report Stage was last week. There have been many amendments laid down during the scrutiny of the Bill by a Committee of MPs across the political sphere. One amendment is a genuine amendment to change the Bill for the better.  It is to allow the people of Gibraltar a vote in a referendum. I believe this is correct as they are part of our South West European Region.

“Others are tabled with the clear aim of wrecking the Bill. One amendment that has been tabled gives a clear date for the referendum and was tabled by my colleague Adam Afraye. I believe to set a specific date will not allow the flexibility to defer a vote should an emergency arise. One example would be the emergency date change we had during the Foot and Mouth Crises in 2001. Any set date has the potential to deny many of my rural constituents the opportunity to vote which is clearly unacceptable. We have said that the referendum should be held by the end of 2017 and we should stick with that.”  The Bill is due to be debated further later in the month.

During the run up to the last election the Liberal Democrat Leader, Nick Clegg, declared in a leaflet, “It's been over thirty years since the British people last had a vote on Britain's membership of the European Union.  That's why the Liberal Democrats want a real referendum on Europe. Only a real referendum on Britain's membership of the EU will let the people decide our country's future.”

Sheryll is now calling on opposition parties to back her pledge to vote for a referendum saying, “It is now time for the opposition to ditch the delaying tactics and swing in behind this bill.  I call on all my colleagues and indeed my opponents, to pledge their support for this bill.”