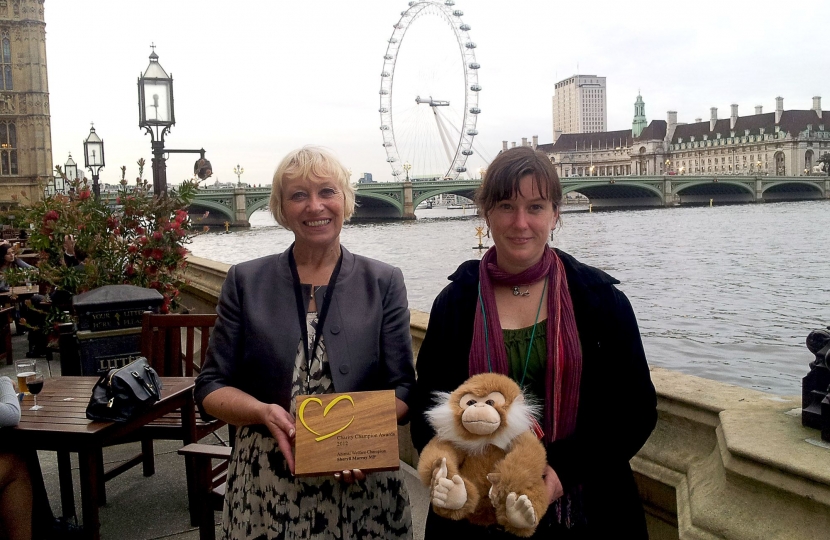 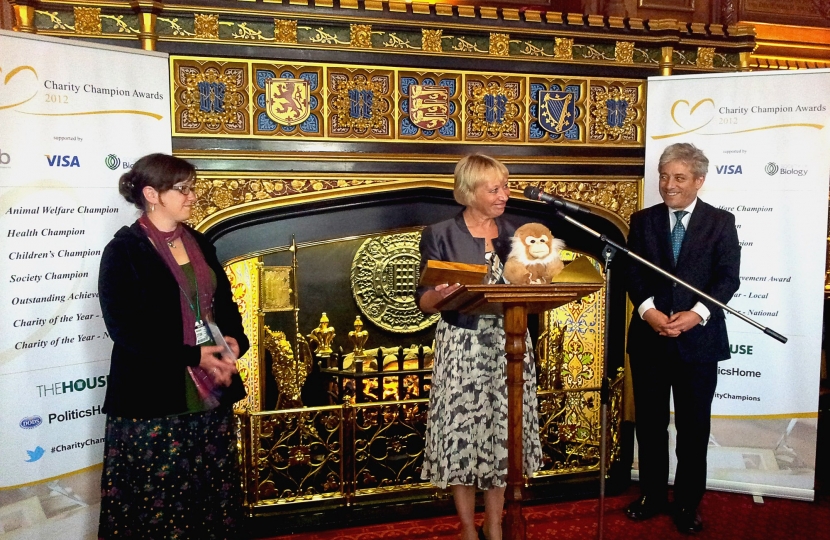 Local MP Sheryll Murray said she was “honoured” to be given the ‘Animal Welfare Champion at last nights Dods Charity Champion Awards in the Speakers Apartments following her nomination by Wild Futures Monkey Sanctuary near Looe.

The Charity Champion website explains the awards, “In their ninth year, the Dods Charity Champion Awards celebrate a really positive side of politics. The awards provide a platform for the voluntary sector to pay tribute to parliamentarians. They recognise a dedication to promoting charitable causes and campaigns in Parliament, to constituents and across the country. In addition, the awards help charities to get their voices heard in the political arena and to promote their special contribution to improving places and lives.”

In their nomination the Monkey Sanctuary said, “Our charity, Wild Futures aims to protect primates and habitats worldwide. Wild Futures’ flag ship project is The Monkey Sanctuary near Looe, Cornwall which rescues and rehabilitates monkeys, many of which come from the pet trade. We feel very strongly as an organisation that MP Sheryll Murray should be recognised as a charity champion 2012. Sheryll Murray visited The Monkey Sanctuary in June 2010 and since then she has been boldly championing our charity and our major campaign – to end the suffering caused by the exploitation of primates as pets and performers in the UK.

“Sheryll has publicly highlighted the plight of animals forced to perform in circuses, using our rescued Barbary macaque called Donkey as an example. She has also introduced a bill to ban the keeping of primates as pets in the UK. The bill is due for a second reading in the coming months. Sheryll has enabled our voice to be heard and has hugely raised awareness of our organisation and campaign. Sheryll clearly understands the unsuitability of primates as pets and recognises that effective, enforceable legislation is the only way to keep primates from suffering. We are extremely grateful to Sheryll for all of her support and feel that she truly is our charity champion who deserves to be recognised.”

Following the event Sheryll said, “I am deeply honoured to be given this award but the true thanks must go to Brooke and the team at the Wild Futures Monkey Sanctuary who deserve the real credit for their hard work. The care they provide for rescued monkeys like donkey, who have led such tragic and harrowing lives, really is the best possible and I would urge everyone to support their endeavours.”

Following the event Wild Futures made the following statement, “Wild futures is delighted that Sheryll Murray has received the recognition she deserves for her work to protect primates from the pet trade in the UK. We look forward to helping her continue this work. On behalf of her adopted monkey donkey- a big thank you!”

Pictured: Sheryll Murray with Campaigns Manager Brooke Aldrich from Wild Futures and the award on the Terrace of the House of Commons and a toy Barbary Macaque like Donkey.