Reminder: Get your Flu Jab 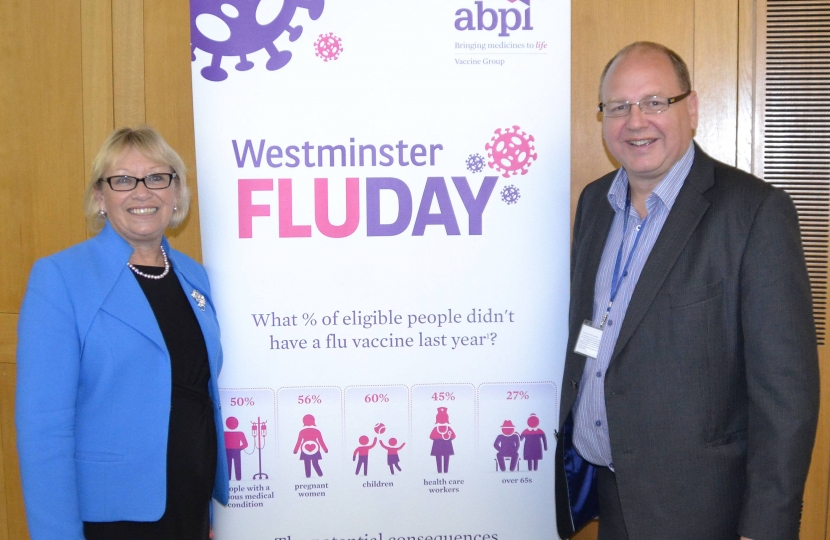 Local MP Sheryll Murray has called on local residents to get their flu jab this year.  Sheryll received her Flu Jab with her partner Bob Davidson in Westminster this week giving a donation to the Carers Trust equivalent to the cost of a private vaccination.

As a doctors receptionist for over twenty years Sheryll Murray speaks with great experience when she says, “I know what a problem this is each year.  Influenza is a highly infectious disease and it is important that as many people as possible get vaccinated each year especially those at risk.

“The consequences of having flu for certain groups of people, such as people with a medical condition, pregnant women, children and people over the age of 65 can be serious. I would therefore urge everyone who is entitled to a free flu vaccine on the NHS to go and get vaccinated.  I would also urge Carers to get their free vaccination.  I salute these army of volunteers who give so much care to the most vulnerable in society who simply could not cope otherwise.  However it is that person who they care for who is often at risk from the flu and I cannot stress enough the importance of these free vaccinations.

“My partner Bob Davidson suffers from asthma and I urge those people who are more susceptible to serious complications to get their jab”.

It is estimated that in excess of 6 million working days are lost in the UK due to seasonal influenza every year.  Flu can put a considerable burden on NHS resources, with numerous GP consultations and hospitalisations. In England and Wales, influenza accounts for over 400,000 general practitioner consultations annually. In England, elderly respiratory hospital admissions during epidemics of influenza cost the UK health service over £22 million every winter.

The Department of Health (DH) recommends free flu vaccinations for those aged 65 or over; and for people with certain chronic conditions such as respiratory disease (including asthma); heart, renal, liver or neurological disease; diabetes; low immune systems; as well as people living in long-stay facilities such as nursing and residential homes, and carers of elderly or disabled people.  Healthcare professionals are also encouraged to have the vaccination, as well as pregnant women and children aged two, three and four.