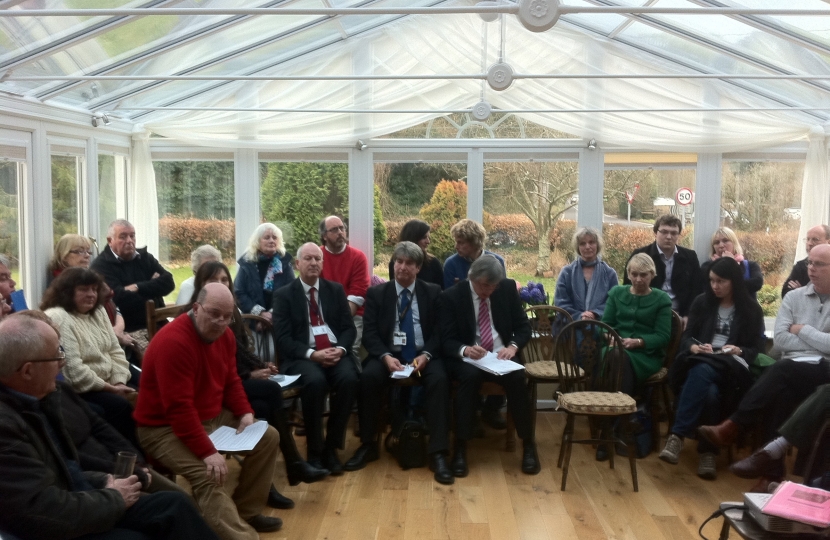 On Friday 4th February 2011 Sheryll Murray, local MP for South East Cornwall, met with campaigners and a representative from Network Rail at Polraen Country House Hotel to discuss the erection of a communications mast in Sandplace.

Firstly Richard Flindell of Network Rail apologised to the around 50 local people who attended for not carrying out the proper consultation process before beginning construction on the mast.  Residents complained that the first they knew of the mast was the start of the building work.

A number of key issues were raised including the effect on road safety, health, the visual impact of the mast but arguably the main question raised was the need for the mast in the first place on such an isolated and small branch line.  It was pointed out that there was a caveat within the EU directives which stated an exception for the need for such equipment for “infrastructure and rolling stock reserved for a strictly local, historical or touristic use or infrastructure which is functionally isolated from the rest of the rail system”.

Sheryll Murray asked that all work cease until she was able to bring this matter to the Ministers attention.  She commented, “I am concerned that money is being spent on this project that could be better used elsewhere.  This seems to me to be just another case of ‘gold plating’ where EU directives have been added to locally to go beyond what is required by the original directive.  The coalition has already taken steps to copy directives rather than re-write and add to them as was the practice under the last government.”

At the meeting Richard Flindell stated that all work would cease until consultation took place.  Sheryll Murray is writing to Network Rail to ask that no work is undertaken until she can take this case to the minister as part of the consultation