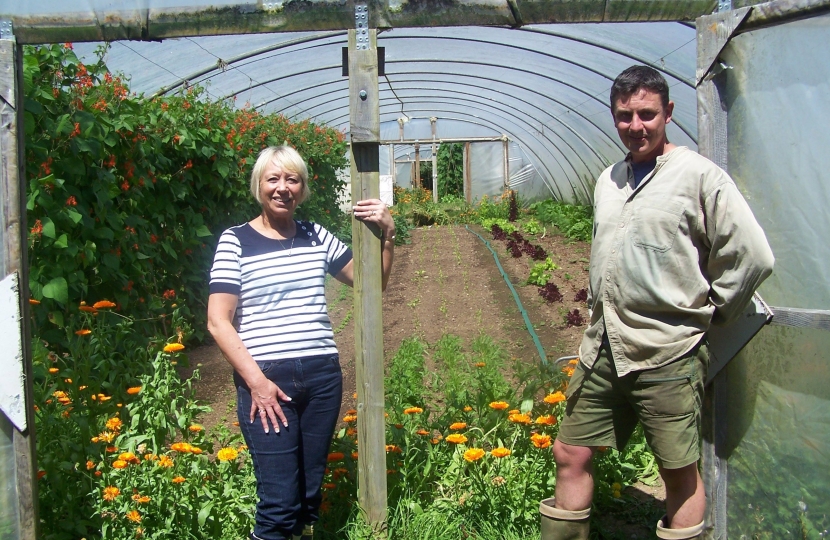 On Tuesday Sheryll Murray MP visited Trevalon Organic Vegetables, a site which has been a producer of vegetables to local shops since 2006 and which has received a £250,000 lottery grant over two years to extend facilities. The aim of the grant is to increase the participation of the community in food growing and learning about food. The money will pay for a new packing area, an outside teaching space, kitchen, resources room and new toilets / shower.

Sheryll began the morning with a presentation of the plan for the future of Trevalon, and met many of the people involved in the creation and maintenance of the fields, including land manager Mark Simon. Sheryll was amazed to see the efforts put in by Mark and other members of the Trevalon Organic Cooperative, which is a means for local people to manage their own allotments, growing fresh, organic fruit and veg.

Sheryll was treated to a tour of the polytunnels, which Mark insisted were key to the survival of many of his fruit and vegetables against both the elements and disease. Following the tour Sheryll met more members of the team and spoke to them further about their plans for the future.

Sheryll said, “I am very impressed by the efforts and determination of the members of the Cooperative in the face of Britain’s unpredictable weather and by their success despite the lack of pesticides or fertilisers.”