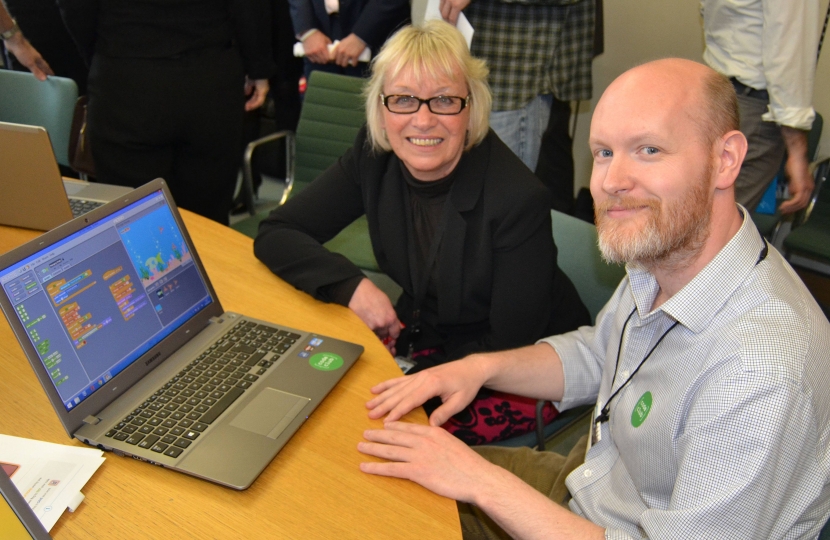 Sheryll Murray MP was pleased to visit an event being sponsored by Samsung in Parliament to hear about Code Club which is a national network of over 1,300 volunteer led after school computer coding clubs teaching how programs work.  At the event Sheryll nominated Lostwithiel to become a code club and to receive new computer equipment from Samsung.

Code Club is a nationwide network of computer-led after school coding clubs for children aged 9-11.  They create projects for volunteers to teach at after school coding clubs or at non-school venues such as libraries or community centres.  The projects teach children how to program by showing them how to make computer games, animations and websites.  Volunteers go to their local club for an hour a week and teach one project a week.

Following the event Sheryll said, “I know the value of fostering digital skills amongst our young and it is crucial for South East Cornwall to prepare our young people to compete in an increasingly technology driven job marketplace.  I nominated Lostwithiel to be a centre because I believe this new equipment would greatly assist the young people in the area get the skills they need.”

Andy Griffiths, President of Samsung Electronics UK added, “Samsung is committed to creating opportunities for the next generation through access to technology and skills development.  Coding is a vital skill for young people who want to pursue a career in technology.”

Laura Kirsop, UK operations Manager at Code Club continued, “We’re really excited about today’s event which aims to raise awareness of the work that Code Club and Samsung carry out and encourage more children to learn code.  It’s great that a range of MPs are willing to come along and pledge their support to raise awareness about digital skills in their constituencies.  It’s vital that children are prepared for the world ahead and fell inspired to build and share the technologies that will shape our future.”

Pictured: Sheryll Murray MP with at the Code Club event