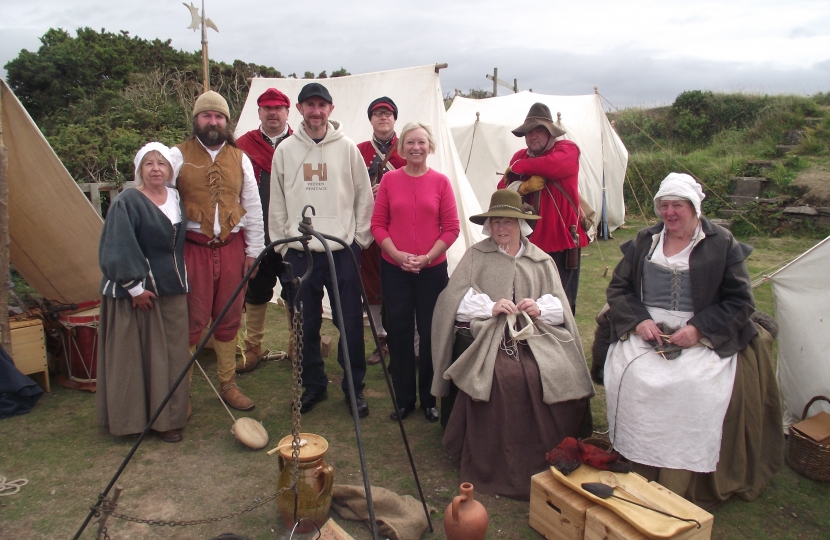 Local MP Sheryll Murray was interested to see some of the history of the Rame peninsula re-enacted and shown by the Hidden Heritage group last weekend.  The group had set up a series of displays and tours of the Whitsand Bay fort at what I now a camp site.  Sheryll was guided by group leader Paul Diamond.

Sheryll, who played in the area as a child, was very interested to see inside some of the fort which had been quite literally dug out by the group.  As the group said, “be one of the first in over 70 years.”

Paul Diamond explained what the group was achieving saying, “The event features local authors book signings, re-enactors, guest speaker programme, historians, heritage trails, tours of the battery & much more.  Away from that, we also have a new website with vast archives to add each week and to generate public awareness for our local projects. One of these projects include a huge online resource that we have built over the last few years on WWI and WWII history across Devon and Cornwall. With the launch of our organisation we will also focus on memorial events to mark both of The World Wars, also including community interaction via coordinating and documenting the  restoration of memorials, especially those of WWI and form a digital memorial online.”

Following the visit Sheryll said, “It was fantastic to visit and see for myself the history that this place clearly has brought to life by a group that cares about its preservation so much.  I would like to thank Paul Diamond and the group at Hidden Heritage for putting so much work and effort into this enterprise.”

“I would also like to say thank you to Rob Wintle, owner of this fantastic Holiday Park for allowing this to happen”