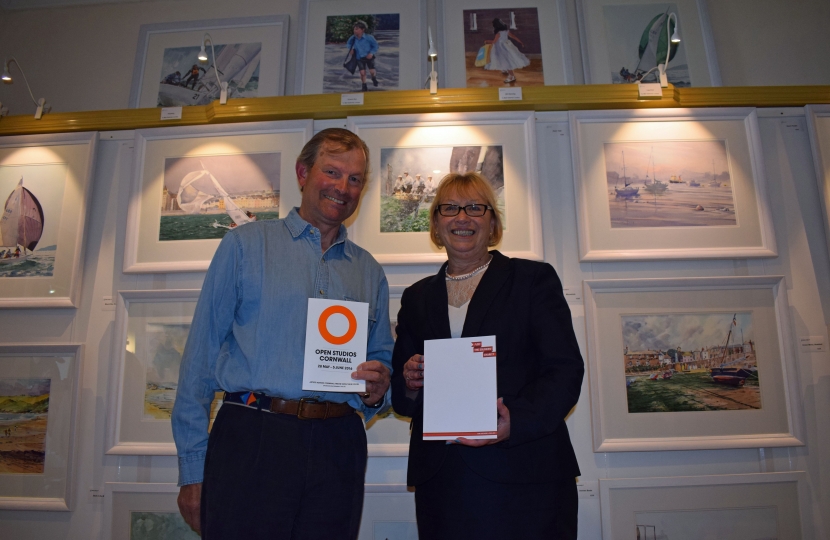 Local MP Sheryll Murray attended the opening of artist Simon Young’s studio in Saltash on Friday as part of the ‘Open Studios Cornwall’ project.  Simon Young has opened his studio until the 5th June to hopefully raise money for ABF The Soldiers' Charity.

Simon Young paints in watercolours.  He specialises in West Country landscapes, figurative and animal paintings.  To raise money for the charity Simon Young is selling paintings, prints and cards.

This is the twelfth year of Open Studios Cornwall and the biggest yet – with 259 artists, craftsmen and designers opening the doors of their studios to the public for nine days.

ABF The Soldiers' Charity give a lifetime of support to soldiers and former soldiers from the British Army, and their immediate families, when they are in need. They make grants to individuals through their Regiments and Corps and support a wide range of specialist charities that sustain the British Army ‘family’, both at home and around the world.

After her visit Sheryll said, “It was a real pleasure visiting Simon Young’s studio and good to see such a talented artist here in Saltash.  ABF The Soldiers' Charity is such a wonderful cause and it is good to see former servicemen like Simon Young and his wife putting so much effort in to help those less fortunate.  I would like to wish him the very best with his open studio.”